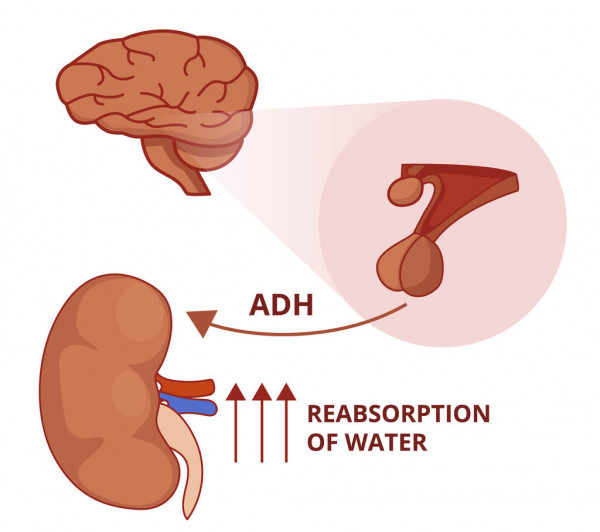 What Is ADH Hypersecretion Syndrome

What Is The Cause Of ADH Hypersecretion Syndrome

The most common reason is that ADH is synthesized and released autonomously by tumor tissues, which accounts for about 80% of the characteristics, mainly including lung oat cell carcinoma, pancreatic cancer, duodenal cancer and lymphoma. Other neuropathy, such as pneumonia, pulmonary tuberculosis and trauma, inflammation, tumor, which affect hypothalamus-neurohypophysis function, can also cause ADH hypersecretion.

What Are The Symptoms Of ADH Hypersecretion Syndrome

In addition to the manifestation of primary disease, the main manifestations of this syndrome are water retention and hyponatremia. Generally, the serum sodium is lower than 130 mmol/L. When the serum sodium is lower than 120 mmol/L, weakness, loss of appetite, nausea and vomiting, lethargy, irritability and even mental disorder occur. Convulsion, coma and even death occur when blood sodium is less than 110 mmol/L. Because water retention generally does not exceed 3-4 liters, and part of water is transferred to cells, there is generally no edema.

3. There was no hypovolemia.

5. The manifestation of the primary disease can be found.

How To Check For ADH Hypersecretion Syndrome

Check that blood sodium is lower than 130mmol/L and urine sodium is higher than 20mmol/L.

How To Prevent ADH Hypersecretion Syndrome

How To Treat ADH Hypersecretion Syndrome

In treatment, the mild patients only limit the daily intake of water to less than ＜100ml, the symptoms can be improved, the body weight is reduced, the serum sodium and osmotic pressure are increased, and the urine sodium discharge is reduced. In severe cases, 200-300ml of 5% sodium chloride solution should be instilled slowly, and the blood sodium should be gradually increased within a few hours, and furosemide can also be used for drainage. The application of anti-ADH drugs, such as norchlortetracycline, can prevent ADH from reabsorption of water in renal tubules. Lithium salt has similar effect, but it is more toxic. The most fundamental treatment for this disease is etiological treatment, and malignant tumor needs surgical resection, supplemented by radiotherapy and chemotherapy.

How To Identify ADH Hypersecretion Syndrome

This syndrome should be differentiated from water retention and/or hyponatremia caused by renal tubular diseases, hypoadrenocortical function, chronic heart failure, ascites due to cirrhosis, the application of hypertonic diuretics and hypothyroidism.

What Are The Complications Of ADH Hypersecretion Syndrome

Convulsion, coma and even death occur when the illness is serious.