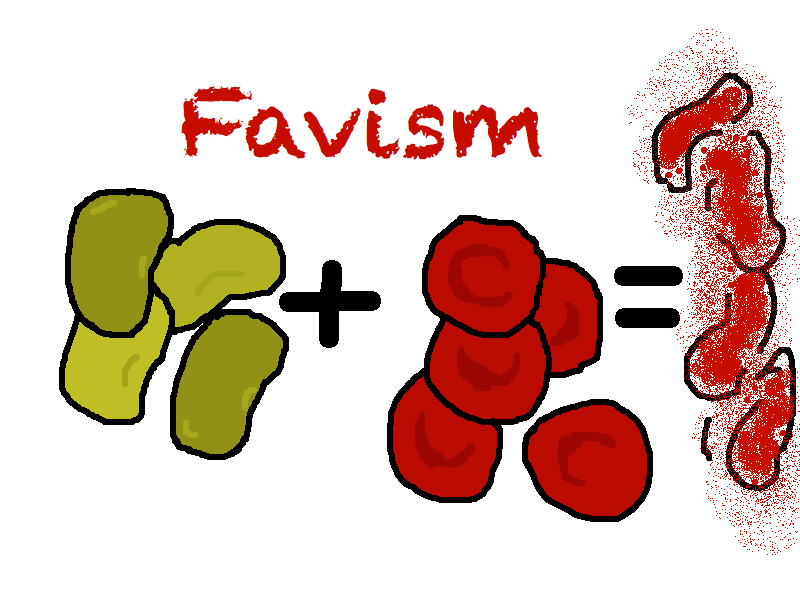 What Is The Favism?

Favism is a disease with acute hemolysis after eating broad bean, broad bean product or contacting with broad bean pollen, and the clinical manifestations are mainly fever, yellowish skin and eyes (jaundice), anemia, soy sauce color in urine (hemoglobinuria), and may be accompanied by dizziness, nausea, vomiting and abdominal pain.

Favism is one of the red blood cell glucose-6-phosphate dehydrogenase deficiency (G6PD Deficiency). The lack of G6PD in patients' bodies leads to the spontaneous rupture and hemolysis of red blood cells. Patients with Favism are prone to induce hemolysis after eating broad beans.

G6PD Deficiency is not Favism in the strict sense. G6PD Deficiency is a general term for certain types of diseases, and Favism belongs to only one of them. Patients with G6PD deficiency do not only develop the disease after eating broad beans, but also develop the disease under the induction factors such as certain drugs, chemicals, and infection. In addition, patients with severe G6PD deficiency may develop hemolysis even without induction.

What Is The Cause Of Favism?

Why does hemolytic anemia occur in patients with favism?

The patient's erythrocyte glucose -6- phosphate dehydrogenase gene was mutated, resulting in a decrease in this enzyme activity and the red blood cells could not be damaged against oxidative damage, causing hemolytic anemia.

What are the common reasons for favism?

Favism has also been reported in infants breastfed after the mother has eaten broad beans. In addition, it is currently believed that bitter melon may also be at risk for favism.

Favism is hereditary. Its pathogenic gene is incomplete dominant inheritance with X chromosome.

Both the male hemizygote and the female homozygote present with a significant deficiency of G6PD. Whether a female heterozygote (i.e., one of the X pathogenic genes) suffers from disease depends on the proportion of the number of G6PD-deficient cells in the cell population, and it has different clinical manifestations, so it is called incomplete dominance.

Who are the most vulnerable to favism?

The frequently-occurring disease of favism occurs in children aged 1–7 years old, and there are far more male patients than female patients, with the disease ratio of male to female being about 7:1.

Do babies with favism get sick as adults, too?

There is no cure for this disease, and babies with favism can still develop it after adulthood if they eat broad beans or come into contact with broad bean pollen. Preventive measures should be taken for the whole life.

What Symptom Does Favism Have?

What are the clinical manifestations of hemolytic anemia caused by favism?

What are the common types of favism?

Taking the Chinese Academy of Medical Sciences as an example, they divided favism into three types: severe patients, medium-sized patient and mild patient.

How To Check For Favism?

What are the diagnostic criteria for favism?

What laboratory tests are required to determine favism?

How To Prevent Favism?

What measures are in place to prevent the occurrence of hemolytic anemia in favism?

If there are favism patients in the family, their blood relatives should fast the broad beans and broad bean products, and avoid contact with broad bean pollen, etc.

If there are favism patients in either spouse's family, women should avoid eating broad beans and broad bean products during pregnancy and lactation.

G6PD deficiency screening should be conducted in areas with conditions, especially in the neonatal period.

What are the measures in place to prevent hemolytic anemia in children with favism?

A prenatal G6PD test is performed on the pregnant couple (it may not be performed if the test was performed before the marriage).

Cord blood was retained after birth to test for G6PD deficiency.

Serum total bilirubin is monitored and blu-ray therapy, and transfusion or even exchange transfusion if necessary, is administered if the daily rate of increase is too high or too high.

How To Treat Favism?

How to treat hemolytic anemia caused by favism?

What precautions do you take when transfusing blood to patients with favism?

Patients with severe episodes should consider transfusion therapy, in which transfusion is the most important and effective measure. Pay attention to when blood transfusion:

Some patients after blood transfusion will have low fever, is the body's resistance to different phenomenon (mild rejection of blood components of others), such as low fever in the short term without processing, but to closely observe the temperature fluctuation, such as high fever, can use warm water bath, ice bag ice cap and other physical measures to cool, or take cooling drugs.

Can favism be cured?

What Should Patients With Favism Pay Attention To In Life?

What are the precautions in the observation and treatment of favism urine?

Patients' urine volume and color changes were observed. Routine urine was sent for examination every day and the pH value of urine was measured. Symptomatic treatment was conducted according to the laboratory results to prevent kidney function damage.

Such as continuous or progressive deepening of the color of the urine, urine volume is less than 90~350ml per day, suggesting that the disease continues to progress or has led to renal impairment, at this time should be according to the patient's condition infusion liquid, in order to maintain effective circulation blood volume, to ensure the blood supply of vital organs.

What are the daily precautions for patients with favism?

What medications should be disabled or used with caution in patients with favism?

Note: Patients are not allowed to take any medicine by themselves. When seeing a doctor, they should voluntarily state that they have the disease, and all medicines should be taken according to doctor's advice.

Can patients with favism have children?

Patients with favism can give birth, but the probability of transmission of favism to offspring is very high, so G6PD defect examination can be conducted in neonatal period. Once the baby is found to be a patient with favism, active preventive measures should be taken.

As long as the patients take preventive measures, they will not suffer from diseases for the whole life.

Can baby with favism get a scheduled immunization?

Yes, you should pay close attention to your baby's health after receiving the vaccine.

Sure. Vitamin K1 and vitamin C should be used with caution in patients with FAVIM. Some milk powder contains these two components, but the content is small. So far, there have been no reports of milk powder inducing the onset of FAVIM in infants.

Are there any other legumes available to patients with favism?

There is currently no evidence that consumption of legumes other than broad beans causes FAVIM, and legumes used by FAVIM patients.

Can favism patients buy medicines from nearby pharmacies if they have a cold?

No! Some drugs, especially compound drugs or antipyretic analgesics or anti-inflammatory drugs with Chinese medicinal components, the instructions of which are not necessarily clear, may induce favism after administration. In addition, there are a variety of new drugs on the market, most of them are not used for clinical observation of favism and are not included in the list of banned drugs in health prescriptions. They must be used under the reasonable guidance of a doctor.

Is prenatal diagnosis of favism necessary?

Favism is not a prerequisite for prenatal diagnosis. It is because some patients, like normal people, have little harm when they don't suffer from the disease without inducing factors, and once they suffer from the disease, serious clinical symptoms may appear. It should be controlled by the doctor according to the patient's situation.

What should be noticed in medication for patients with favism?

Although a list of banned and cautiously used drugs has been proposed, there are a wide range of drugs that are not necessarily included. In addition to following your doctor's advice, you can also look up more comprehensive drug-related questions at these two websites for G6PD deficiency.