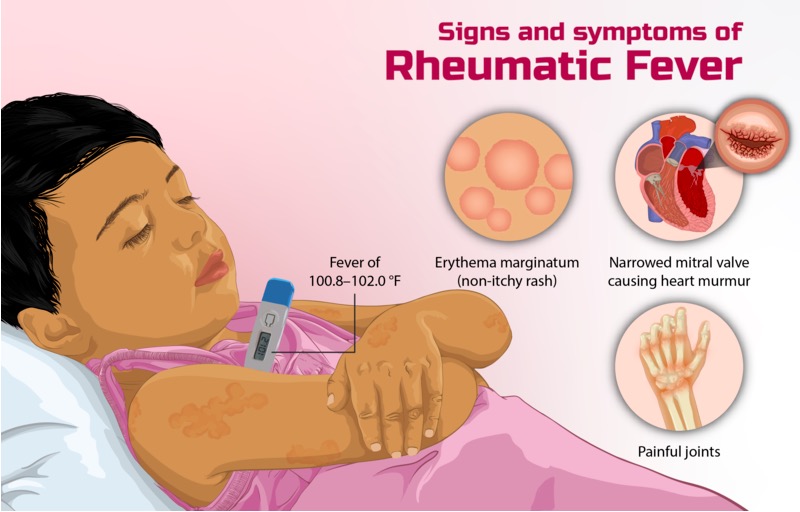 What Is Rheumatic Fever?

Rheumatic fever is an autoimmune disease caused by the immune system of the body attacking its normal tissues after the throat is infected with Group A hemolytic streptococcus.

Treatment of rheumatic fever includes removal of streptococcal infection, reduction of joint and heart damage, and management of various complications.

Is rheumatic fever a common disease?

Rheumatic fever was common before the middle of the 20th century, after which the incidence of rheumatic fever decreased significantly in all countries of the world, especially in developed countries.

What Is The Cause Of Rheumatic Fever?

Is rheumatic fever related to the environment?

Is the onset of rheumatic fever related to season?

The disease often occurs in rainy seasons in winter and spring.

What age group does rheumatic fever happen to?

Rheumatic fever can occur at any age, most commonly in children and adolescents aged 5 to 15 years.

What Is The Symptoms Of Rheumatic Fever?

What are the manifestations of rheumatic fever before its onset?

One to six weeks before the typical symptoms of rheumatic fever appear, there are often pharyngolaryngitis or tonsillitis (the manifestation of pharyngeal streptococcus infection), such as fever, sore throat, cough and submandibular lymph node enlargement. Some patients have such uncomfortable symptoms as fatigue, fatigue, nosebleed, and abdominal pain.

What are the typical manifestations of rheumatic fever?

Do rheumatic fever patients have fever?

What are the manifestations of arthritis caused by rheumatic fever?

Arthritis caused by rheumatic fever is mainly manifested as migratory polyarthritis. It mainly involves large joints such as knee, ankle, elbow and wrist, manifested as red, swollen, hot, painful and limited mobility. The arthritis in each joint spontaneously resolves after a period of several days without leaving any deformity, but it often recurs. Joint pain generally resolves within 2 weeks and rarely lasts for more than a month.

Arthritis caused by rheumatic fever can also occur in other joints, but it is relatively rare, such as hip joints, finger joints, mandibular joints, sternoclavicular joints, etc.

What are the manifestations of carditis caused by rheumatic fever?

Carditis is the most serious manifestation of rheumatic fever, with the main symptoms including palpitations after exercise, shortness of breath, and chest (precordial) discomfort. According to the different sites, it can be divided into heart valve inflammation, myocarditis and pericarditis.

What is annular erythema of rheumatic fever?

Annular erythema is a rash that presents as pale red annular spots, varying in size and with a pale center, which are distributed on the trunk and four limbs near the trunk and generally appear suddenly and resolve after a few hours or a day or two, which no longer occurs after resolution. In a few patients, however, annular erythema occurs intermittently and repeatedly, which can last for several weeks. Annular erythema usually occurs later after streptococcal infection.

What is the subcutaneous nodule of rheumatic fever?

Chorea is uncommon and occurs mainly in children aged 4 to 7 years. It manifests as aimless and involuntary movements of the whole body or local muscles, such as winking, shrugging and necking, and tongue twirling. There may also be rhythmic alternating movements of flexion and extension of four limbs, which aggravates when excited and disappears after falling asleep. Children are often accompanied by emotional instability.

Chorea can last for about one to three months, and individual cases recur within one to two years. A small number of children will have sequelae to varying degrees.

What diseases can rheumatic fever cause?

The most common complications of rheumatic fever are infective endocarditis and respiratory tract infection. Patients with chronic or recurrent rheumatic fever may develop hypertension, hyperlipidemia, hyperglycemia, and hyperuricemia, which are mostly caused by the long-term use of glucocorticoids. Middle-aged and old rheumatic fever patients may be combined with coronary heart disease, myocardial infarction and other diseases.

How To Check Rheumatic Fever?

What are the abnormal laboratory results suggesting rheumatic fever?

What test can determine whether there is carditis?

These tests are performed by the doctor depending on the condition and hospital conditions and can also be used as a tool for post-treatment follow-up.

What diseases are similar to rheumatic fever and need to be distinguished?

How To Prevent Rheumatic Fever?

Can rheumatic fever be prevented?

What is the primary prevention of rheumatic fever?

Primary prevention refers to the prevention of rheumatic fever. Including:

What is the secondary prevention of rheumatic fever?

How To Treat Rheumatic Fever?

How to treat rheumatic fever?

How should rheumatic carditis be treated?

Treatment needs to be conducted under the guidance of a professional physician throughout the course. Cardiac inflammation should be treated with glucocorticoids for a minimum of 12 weeks.

If the condition does not improve, glucocorticoid treatment should be extended for 9 months or even more than one year according to the situation, and aspirin can be used together until the disease is completely recovered. Follow-up visits should be made regularly thereafter for cardiac examinations.

What is subclinical rheumatic carditis? How to treat?

Subclinical rheumatic carditis is rheumatic carditis without obvious symptoms. If you have no previous history of carditis and a recent history of rheumatic fever, you only need to follow up regularly and insist on benzathine benzylpenicillin for injection prevention without special treatment. At ordinary times should avoid heavy manual labor, on the other hand should also be moderate activity and exercise.

For patients who have suffered from carditis or rheumatic heart disease, specific treatment measures can be formulated according to the changes of laboratory tests, echocardiography, ECG and signs, and 1 course of anti-rheumatic treatment can be applied if necessary.

How to treat rheumatic chorea?

Treatment should be performed under the guidance of a skilled physician. Patients with chorea should try to avoid strong light, noise stimulation, the use of sedatives (such as valproic acid), at the same time anti-rheumatic treatment. Glucocorticoids and immunosuppressive agents may also be effective for chorea. Gamma globulin or hormone shock therapy can be given to critically ill patients.

Is rheumatic fever easy to recur?

Some studies have shown that the recurrence rate of rheumatic fever is about 30%, mostly within 2 to 5 years.

What is the prognosis of rheumatic fever?

What Should Patients With Rheumatic Fever Pay Attention To In Life?

What should patients with rheumatic fever pay attention to in daily life?